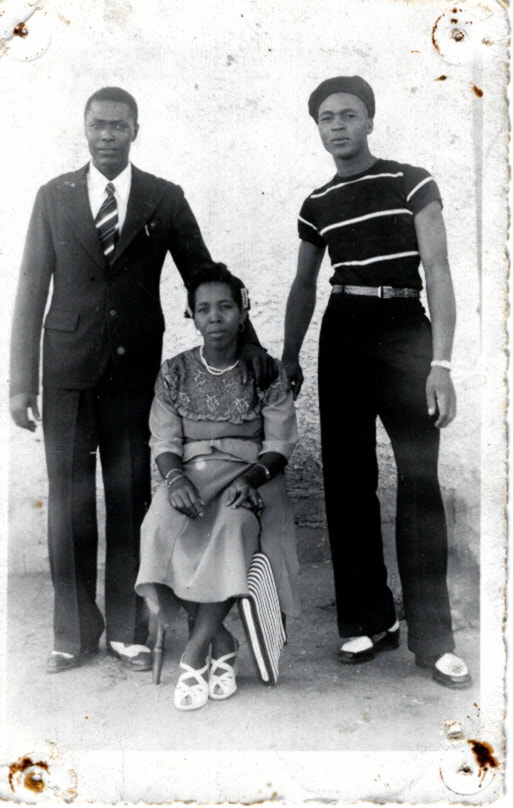 This is my mother and father and Uncle (my Mother’s brother). My parents and their siblings were born in Carriacou a tiny island a short distance from Grenada in the Eastern Caribbean.  I always thought this photograph was taken in Aruba as I knew it was before 1950. But I’ve since learned from my oldest sister that the period is correct but it was in Trinidad. It was normal for ambitious young men to go to sea in Carriacou but my father’s mother wanted him to learn a trade and sent him to learn carpentry.  He found the process of being an Apprentice Carpenter to be slow, tedious and after never getting close to a hammer and tired of sweeping up wood shavings, he got his ship papers and went to sea. He was only 15 but he was tall for his age so he looked older than his years and was able to find work.  He travelled throughout the English and French-speaking Caribbean, South America, Cuba, Haiti and the southern states of the US for nearly 20 years. My father enjoyed the life of a seaman, he learned about the styles and fashion of Europe and the US particularly the fabrics used in the making of clothes. He selected clothes on the basis of the fabric. He is wearing a suit made from Vicuna (Vee or Vy) wool which as some of you know is the finest and most expensive wool in the world, it is soft and light and cool in the heat of the Caribbean.

My mother is wearing shoes that my father bought in Venuzuela for her, she is also wearing jewellery, bangles, watch, pearl necklace etc.  My Mother told us that my father always returned from his six months at sea with gifts of jewellery and fashionable clothes.

As you can see they are a fashionable group, the third person with my parents is my mother’s younger brother showing his youth by dressing casually in the fashionable style of the day.

Being away from home, it was traditional to go to the photographic studio to pose for photographs to send to parents and other loved ones to show that you were still alive but also to show that you were prosperous and doing well.
Trinidad was a destination for many Caribbean people in the 40s with the discovery of oil, my parents spent their early married life there and received many visitors who needed somewhere to live before they got on their feet, found jobs and somewhere to live.

Throughout my father’s life, he always chose clothes made of ‘good’ fabric and my mother and her younger brother were always fashionable.